Making Moves for the Military 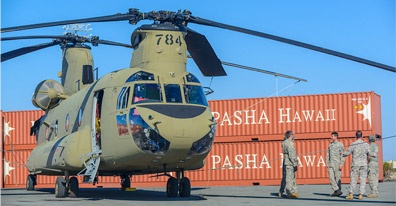 Over the Waves
After two years of planning and discussions, this May the U.S. Navy gave Pasha Hawaii the green light to test surface transportation as a viable means of shipping large, classified breakbulk cargo previously transported only via military airlift. On Jean Anne's voyage 206E, Pasha combined forces with Don's Makiki and Landstar, Inc. to move the 18' wide, 96,000 lb. shipment from Pearl Harbor to Chesapeake VA. Door-to-door movement was accomplished and monitored using a highly detailed management plan communicated daily to the following project stakeholders: the Pearl Harbor Naval Shipyard, Hawaii and U.S. linehaul carriers, the Surface Deployment and Distribution Command, Pasha Stevedoring & Terminal Services, various Departments of Transportation, the Navy's Submarine Program Management Team and NavSea Logistics. Feedback from the Navy following successful completion of this cargo's first-time-ever movement via surface transportation, "Many thanks for the great support in getting this equipment from Hawaii to Virginia! Good job! This movement has proven to be a unique shipping capability. You have allowed us to add another 'tool' to our tool box."