Rock and Roll (On) with Pasha Hawaii and Grace Pacific 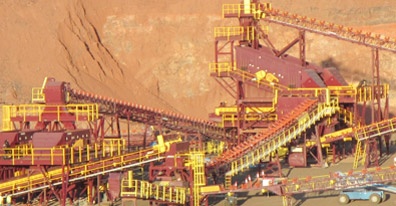 Grace Pacific's Makakilo Quarry, in operation for over 25 years in Honolulu, provides valuable resources for all facets of Hawaii's construction Industry. Historically it has produced 70 percent of the Grade A quality aggregate used for asphalt paving on the island. To reduce the demand for aggregate, the company has invested more than a million dollars in equipment that allows them to recycle concrete demolition rubble and worn-out asphalt pavements. Since 2003, they have been providing recycled products at Makakilo, helping to preserve Oahu's limited natural resources and reduce the demand on community landfills.

Several years ago, however, it became obvious that the quarry's Grade A aggregate was in diminishing supply and the facility would either need to be expanded or the Grade A rock would need to be imported, which would cost much more than locally produced aggregate. Grace Pacific noted at the time that whatever could be developed in Hawaii as a raw product would save the cost of having it shipped, local labor would be used, and the money would stay in Hawaii. Addressing the concerns of the local community led to modification of an expanded site plan, environmental issues were addressed, and the company continues to proactively protect both the environment and the neighborhoods they work in.

Logistical Nightmare Solved by Pasha Dream Team
Pasha Hawaii's involvement has been a two-year project. In April of 2010 Grace Pacific entered into a purchase agreement with Aggregate Machinery Inc., of Salem Oregon for the purpose of supplying a new crushing and screening plant for the Makakilo Quarry site. This new plant would be the largest facility of its kind built in the U.S. and would require over 200 truckloads of equipment from locations all across the Mainland. Grace Pacific was challenged with the logistical nightmare of how to get all this from the manufacturer's location to the West Coast, and then cross 2,000 miles of ocean to Hawaii. Grace interviewed several transportation companies seeking options that would both protect the equipment from the harmful effects of saltwater, as well as accommodate the unusual height, width, length and weight of the loads to be transported. In January 2011, after careful consideration, Pasha was chosen as the carrier of choice, whose Dream Team skillfully coordinated the inland transportation, ocean freight to Hawaii and final delivery to the quarry site.

Zero Damage is the Right Number
Consultant Rick Andrews adds, "It was Pasha's innovated approach to the project that was the determining factor in reaching an agreement with the company. It was Pasha's idea to lease 30 flat bed trailers, haul them three at a time to each location, and drop them for loading. When the trailers were completely loaded Pasha would pull the full trailer to their terminal in San Diego, while bringing more empty trailers to the loading site. This method allowed the machinery to be loaded by the manufacturer according to its specifications, and then remain as is until reaching the quarry. In addition, the unique design of Pasha Hawaii's Jean Anne allowed all cargo to remain below deck and free from the elements for the entire voyage. It was the combination of Pasha's equipment and personnel that made the project such a success. From the beginning the people within Pasha understood and worked through problems of this unusual project. In the end Grace Pacific was able to receive 237 loads on time and with zero damage."