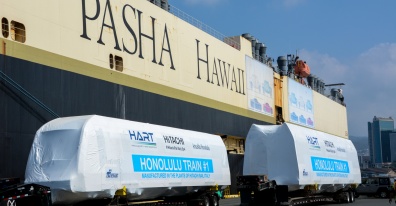 The VIP cargo arrived safe and sound this morning on a Pasha ship.

Two Ansaldo end rail cars (the prototype of the first driverless cars in the U.S. and the first with surf racks) were unloaded at the docks and met with big smiles.

The delivery marks years of planning and design as well as hundreds of millions of dollars in rail contracts. The rail cars are expected to have a lifespan of 40 years.

"Imagine what will happen over 40 years. These trains will connect communities. They will connect the homes with the jobs, so this is an important day for us," said HART board chairman Don Horner.

The trains came via San Diego instead of Long Beach, California -- a longer and more expensive route.

The Italian shipping company entrusted with transport said the height of the trains were an issue for this first delivery.

"The important thing is we are doing this shipment so that we can guarantee a safe transit to make sure everything is done properly," said Baggio USA’s Marco Marachin.

Over the next several weeks, crews will be pouring the cars, making sure they work like they are supposed to.

The detailing and eventual guideway testing will all take place at HART's operations center in Waipahu.

"The elements on board the train, while it’s not moving, everything from air conditioning to the lighting, LED signage, will all be tested. We will give you a sneak peak of that first train, probably at the end of April," said HART director Dan Graubaskas.

The next shipment of another two trains is set to arrive Sunday, and if you are lucky, you might see all four with a police escort on the freeway at the end of next week.

Momentum is building for the rail project -- the most expensive municipal project in Hawaii’s history.

Crews have begun working on the guideway for the eighth mile of the 20-mile rail route. Ground was broken for the first rail station this month with a second scheduled for next week Monday.