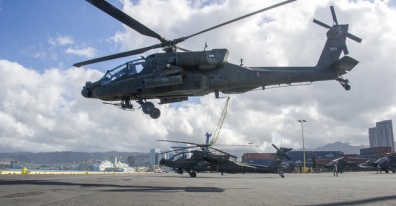 An Apache helicopter took off from Pier 1 and headed for Wheeler Army Airfield in Wahiawa on Monday, one of 24 such Army aircraft that had arrived in the islands via Pasha Hawaii's Jean Anne on Friday.

The evolving nature of the 25th Infantry Division on Oahu is being demonstrated with the arrival of 24 AH-64 Apache helicopters that are adding significant firepower in the air, while the ongoing departure of Stryker armored vehicles is removing some of it from the ground.

The Apaches arrived by Pasha Hawaii’s cargo ship Jean Anne on Friday and flew off from Pier 1 in groups of four Sunday and Monday, heading for Wheeler Army Airfield — almost instantaneously creating a new helicopter flight line at Wheeler in the process.

The wasplike attack helicopters with the 2nd Squadron, 6th Cavalry Regiment, will be paired with Shadow unmanned aerial vehicles starting in early 2017 to create a unique attack and reconnaissance role.

“This platform will provide a lot more reconnaissance scout capability, as well as attack capabilities for the ground forces out here,” Johnston said.

The arrival in Hawaii of AH-64D Longbow Apaches is part of a controversial Army cost-cutting plan retiring its aging OH-58 Kiowa Warriors, replacing them with Apaches taken from National Guard units around the country, and pairing Apaches with the surveillance drones.

The 25th Combat Aviation Brigade’s Apaches hail from National Guard units in Utah, Mississippi, North Carolina and Texas, division spokesman Lt. Col. Rob Phillips said. The transformation of the 25th Division to include Apaches is an example of the Army’s enhancement of its posture in the region as part of the re-balance, Phillips said.

The Kiowa was mostly a scout helicopter with some attack capabilities, while the reverse is true of the Apache. The Kiowas in 1999 replaced the AH-1F Cobra in Hawaii, which was the Army’s first dedicated attack helicopter.

When Wheeler’s 30 Kiowas were retired in early 2015, most of the 2-6 Cavalry soldiers were sent to South Korea on a nine-month rotational tour, using helicopters already there.

The unit said its ranks are growing from about 400 soldiers to more than 500 with the addition of 12 RQ-7B Shadows in three platoons. There will be an increase in the volume of aviation operations beginning in mid-May with the Apaches, but it will be roughly the same as the amount of helicopter training that occurred prior to 2-6’s deployment to South Korea, Phillips said.

Four Apaches and about 60 personnel have been on Oahu since January from the 1st Battalion, 229th Aviation Regiment, out of Joint Base Lewis-McChord in Washington state to help fill the attack/reconnaissance helicopter void left with the retirement of the Kiowas. Those Apaches are expected to remain on island until mid-May.

The 2-6 squadron at Wheeler has only eight trained AH-64 pilots, but officials said more are in the training pipeline.

The arrival of the Shadows will increase an already large contingent of military unmanned aircraft in Hawaii. The Shadow was first deployed in the early 2000s, and the “V2” configuration being paired with the Apaches is 12 feet long, weighs 467 pounds and has a wingspan of 20.4 feet and a flight endurance of nine hours, according to its maker. The 25th Division said the UAVs will be unarmed.

At the same time the 25th Infantry Division is increasing its helicopter capability, it continues its divestiture of 19-ton Stryker armored vehicles and transformation of the 2nd Stryker Brigade Combat Team back to a light infantry unit.

The Army announced in July that as part of a servicewide downsizing, the Stryker Brigade would lose a maneuver battalion and its armored vehicles.

Some 320 Stryker vehicles in storage are being shipped to a National Guard unit in Washington state. Col. James Smith, commander of the 599th Transportation Brigade, said as of Friday, 71 Strykers had arrived at Joint Base Lewis-McChord.

“We look to ship about 25 to 30 Strykers a week, but it’s really dependent on the space that the carrier has on the boat,” Smith said. The eight-wheeled Strykers are being moved on flatbed trucks to Honolulu Harbor. The process began in March and is expected to be completed in late June or July, Smith said.

As part of the Army’s downsizing, Schofield Barracks is losing 1,200 soldiers with the bulk coming from the transformation of the 2nd Brigade, Phillips said. The 1st Battalion, 14th Infantry, will be disestablished in October.